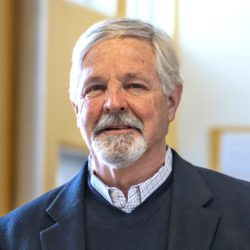 John Loritsch, visiting assistant professor for architecture, earned a degree in architecture at Iowa State in 1975 and then worked in Minneapolis. In 1979, he returned to his hometown of Chicago to begin a long employment with Otis Associates, eventually forming Otis Koglin Wilson, where he became a partner during a 29-year relationship. His commercial work focused on the mid-rise/ mixed-use market in addition to schools, athletic facilities, and residential projects. After retiring from Rinsinger Associates, he became an adjunct professor at Judson in January 2018.